Sorry, this entry is only available in European Spanish. For the sake of viewer convenience, the content is shown below in the alternative language. You may click the link to switch the active language.

Sorry, this entry is only available in European Spanish. For the sake of viewer convenience, the content is shown below in the alternative language. You may click the link to switch the active language. 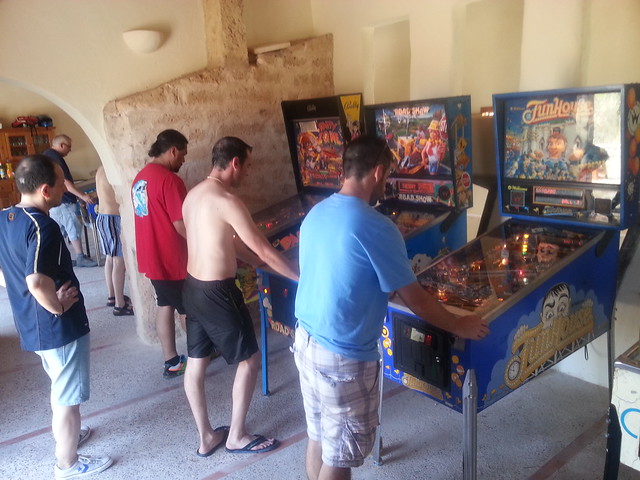 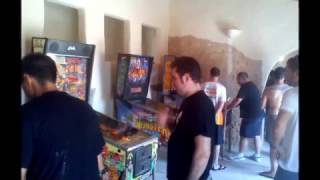 (Click here for the 2013 review)
Pedro Díaz is a pinball fan who invited us last year’s to his Majorcan tournament. This time I could not break my word to go, and I’m glad I did because the experience was great.

The first thing that stands out is the place. It’s a beautiful “pagesia” (some kind of farm) glued to the Son Sant Joan airport runway in the equally beautiful village, although it took me a bit to find it because the entrance was not obvious. You may say that the aircrafts noise would be a problem, but it seems they greatly reduce throtle while landing, and we attendants almost made more fuss, so it wasn’t annoying at all.

I’ve never been fond of these slot machines but on Saturday August 4 I was able to appreciate the art that hides behind its restoration, maintenance and enjoyment. Even better, there was no obligation to pay for the games. Facilities are provided by AENA and attendance is free.

I found interesting that at least one of the pinballs had music instruments that were familiar, very similar to the FM-PAC (Yamaha YM2413) of the MSX 2+ and Turbo-R computers, if they were not the same sound chip. Other more modern machines had already digitized effects.

Locomosxca, known MSX user of Mallorca, is already a regular at this event and beat us with a good article and video.

An interesting anecdote is the one Pedro told us about the U.S. imported pinballs to Spain, which were more difficult to play because the players here showed more skills and the company was making ​​less money.

Pedro Díaz (Drator) and the trophies

We enjoyed a sumptuous barbecue in good company

Via Locomosxca we heard about the Sant Jordi IV Pinball Tournament on Saturday August 4 at the country house of ca’n Reviu, near the airport. This time we can’t miss it. For those coming from outside and now that the crisis is getting worse you can even camp on his terrain.

Sorry, this entry is only available in European Spanish and Catalan. For the sake of viewer convenience, the content is shown below in this site default language. You may click one of the links to switch the site language to another available language.

It's a non-profit association which arranges several activities and events to promote the history of computing and digital entertainment. It's also the main event we promote.

Get our news on your e-mail (in Spanish)

Help us save the History of Computing and Videogames! Get a T-shirt and your member card. You'll participate in the congresses and be able to contribute with your ideas and proposals regarding retro events. And come to the recordings of RetroActivo podcast.